H20 based Fire Suppression System
Watermist is a versatile and highly efficient fire-fighting medium. What differentiates Watermist from traditional water based systems is its reduced droplet size. When a droplet of water vaporizes, it expands by some 1,600 times. Because heat absorption is a function of surface area and not volume, smaller droplets mean more surface area and therefore faster heat absorption.

Watermist has the unique ability to deliver water as a fine atomized mist. This mist is quickly converted to steam that smothers the fire and prevents further oxygen from reaching it. At the same time, the evaporation creates a significant cooling effect of combustion gases and blocks the transfer of radiant heat. In this way, Watermist combines the fire suppression properties of both conventional water-based Deluge or sprinkler systems and gaseous fire suppression systems. 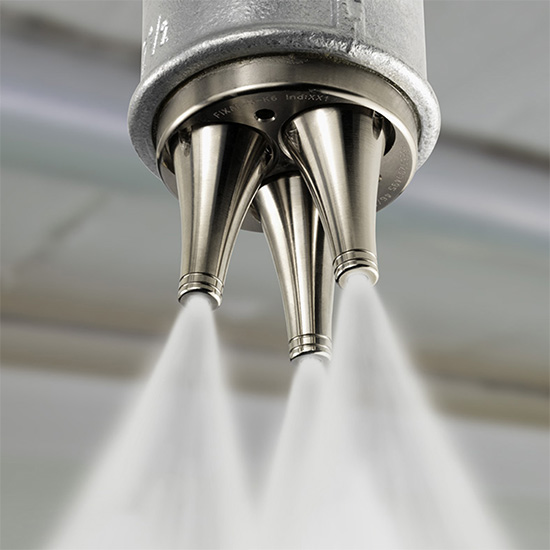 The effectiveness of a water mist system in fire suppression depends on its spray characteristics, which include the droplet size distribution, flux density and spray dynamics, with respect to the fire scenario, such as the shielding of the fuel, fire size and ventilation conditions.

The use of water mist fire suppression, when compared to the use of gaseous agents and traditional sprinkler systems, has revealed advantages such as:

It is an exceptionally efficient fire safety technology, as it uses significantly less water than traditional sprinkler systems, while achieving a similar or better level of performance, and minimizes both fire and water damage. Its performance is based on fast evaporation of water that cools down the flame and surrounding gases as well as locally displaces oxygen. The very small droplets as such effectively block radiant heat. Watermist micro-droplets, represent water in its most effective fire fighting form.

Want to know more about Water Mist System?
Contact Us