Advanced, Intelligent Fire Suppression Systems
Pre-action fire sprinkler systems employ the basic concept of a dry pipe system in that water is not normally contained within the pipes. The difference, however, is that water is held from piping by an electrically operated valve, known as a pre-action valve. Valve operation is controlled by independent flame, heat, or smoke detection.

Two separate events must happen to initiate sprinkler discharge. First, the detection system must identify a developing fire and then open the pre-action valve. This allows water to flow into system piping, which effectively creates a wet pipe sprinkler system. Second, individual sprinkler heads must release to permit water flow onto the fire. 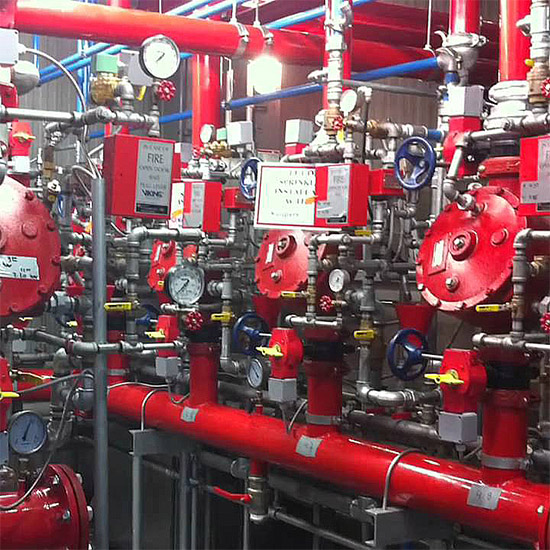 Pre-action sprinkler systems are specialized for use in locations where accidental activation is undesired, such as in museums with rare art works, manuscripts, or books; and Data Centers, for protection of computer equipment from accidental water discharge.

They are hybrids of wet, dry, and deluge systems, depending on the exact system goal. There are two main sub-types of pre-action systems: single interlock, and double interlock.

In some instances, the pre-action fire sprinkler system may be set up with a double interlock in which pressurized air or nitrogen is added to system piping. The purpose of this feature is two-fold: first to monitor piping for leaks and second to hold water from system piping in the event of inadvertent detector operation. The most common application for this system type is in freezer warehouses.

Want to know more about our Pre Action System?
Contact Us